The abbreviation for the state Ohio is OH. 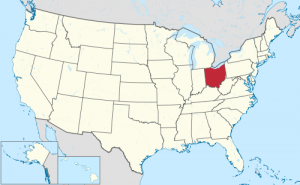 Ohio is a state located in the Midwestern region of the United States, and takes it name from the Ohio River, itself taken from the Seneca Native American word for “great river”. Ohio is bordered by Lake Erie, Michigan, Pennsylvania, Kentucky, West Virginia and Indiana. First populated by Native Americans of Iroquoian descent among another groups, the state was then populated by French fur traders who worked the glaciated till plains before being traded to Britain in 1754. Following the American Revolution, slavery was abolished in the Northwestern Territory (including Ohio), and the state played a crucial role in the foundation of the United States. Ohio’s state capital has shifted throughout the ages, with Columbus ascending to capital status in 1816.