The abbreviation for the state Utah is UT. 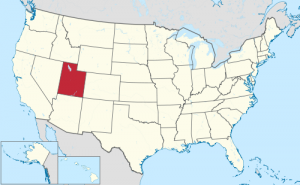 Utah is a landlocked state found in the western United States, bordered by Colorado, Wyoming, Idaho and Arizona. With a population of roughly 3.1 million and a land area of some 84,899 square miles, it is one of the least populated states. Historically explored by Spanish conquistadors in the 16th century, it was later settled by Navajo Native Americans in the 18th century and by Latter Day Saints in the 19th century, the latter of which hold their religious headquarters in the state’s capital, Salt Lake City. The geography of Utah is diverse, with expansive pine forests, mountain valleys and arid deserts littered with sandstone towers such as Arches National Park.