The abbreviation for the state New York is NY. 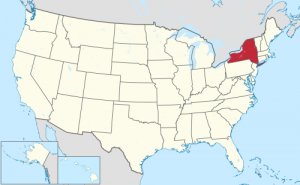 New York state is the fourth most populous state of the United States of America. The state is home to New York City, the most populous city in the United States and one of the founding Thirteen British Colonies which declared independence as American subjects from 1776. Named after the Duke of York (and the city of York, UK), both New York City and state retain the name they were given upon capture from the Dutch Republic in 1664 (it was formerly New Amsterdam). The region is rich in history, owing to its position on the Northeastern coast and as an immigration entrance point.