The abbreviation for the state New Jersey is NJ. 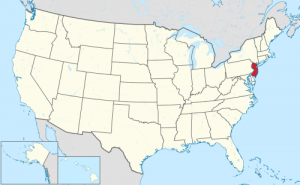 New Jersey, which has nine million residents, is the most densely populated of the 50 United States. It was named after Jersey, an island in the English channel, after an English fleet took control of the area from the Dutch, who had themselves claimed territory originally inhabited by the Lenape. Nowadays New Jersey is known as the Garden State because of its several national parks and areas of natural beauty. It’s also home to the Ellis Island National Monument. Famous New Jerseyites include astronaut Buzz Aldrin, scientist Virginia Apgar, basketball star Shaquille O’Neal and musician Bruce Springsteen.