The abbreviation for the state Florida is FL. 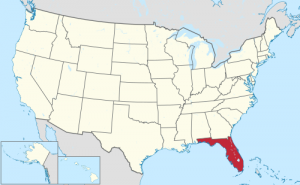 Florida is southern state consisting of much of a peninsula between the Atlantic Ocean, the Straits of Florida and the Gulf of Mexico. Bordered only by Alabama and Georgia, both Florida’s capital — Tallahassee — and its largest city — Jacksonville — sit at the north of the state, while the southern region is characterised by a subtropical coastline with low elevation. Florida’s Orlando city is renowned as the location of both Walt Disney World and Universal Studios, two prime tourist sites which give it the nickname “The Theme Park Capital of the World”. With a rich history of European conquest, slavery and immigration from the Americas, the state was largely unpopulated until the invention of air conditioning, which facilitated a housing and population boom.