The abbreviation for the state Indiana is IN. 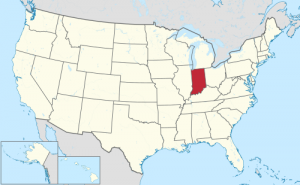 Nicknamed the Crossroads of America because of the many interstate highways that cross it today, as well as its past as a centre of railroad travel, Indiana became the 19th member of the United States in 1816. Colonised by French and British pioneers, it was originally inhabited by Native American tribes such as the Shawnee, Illini and Miami. These days the capital, Indianapolis, is home to the Indy 500, one of the most famous automobile races in the world, and its notable residents past and present include 16th President of the United States Abraham Lincoln, entrepreneur and activist Madam C. J. Walker, aviator Amelia Earhart and actor James Dean.