The abbreviation for the state Massachusetts is MA. 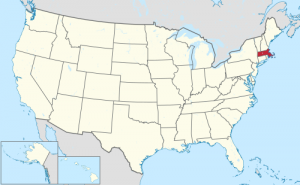 Massachusetts is located in New England, in the northeastern region of the United States. Bordered by Connecticut, Rhode Island, New Hampshire, Vermont and New York, the state’s capital, Boston, is the only state capital of the contiguous United States to sit on an oceanic shoreline (Atlantic). As a major centre of colonisation in the 17th century onward, the state has a rich history as a port for English settlers travelling on the Mayflower ship. John Adams, one of the United States’ Founding Fathers is from Massachusetts state, and the region has a rich intellectual history, with Harvard and MIT (Massachusetts Institute of Technology) Universities among the highest performing in the world.