The abbreviation for the state Alaska is AK. 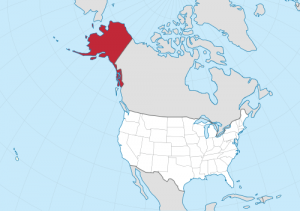 Alaska is a state which is divided from the core United States by Canada, and sits at the northwestern extremity of the continent. With a maritime border with Russia which can be reached by the Bering Strait, the state was purchased from the Russian Empire in 1867 and folded into the United States. It is the coldest and largest US state, as reflected in a rich geography of mountain ranges (the largest in North America), volcanoes, waterfalls, rivers and glacial coverage. Its capital city, Juneau, and its most populous city, Anchorage, are both centred on fishing, tourist and military economies. With a rich Native American ancestry, Alaska was one of the last states to be colonised by European settlers.