The abbreviation for the state Washington is WA. 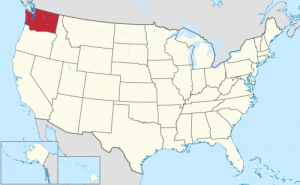 Washington is in the Pacific Northwest of the USA. It is named after the first president of America – George Washington. The largest city in the state is Seattle which holds 60% of the population of Washington. It is the 18th largest state and consists of numerous islands, mountain ranges, rainforests and bays carved out of glaciers. It is a leading lumber producer of pine, spruce, fir and cedar, and is the US’s largest producer of grapes, lentils, apricots, apples and cherries. Washington is known for its manufacturing industries, including ship-building, aircraft and missile building, and transportation equipment. The climate of Washington varies from east to west of the state. A Mediterranean climate prevails in the west, whereas dry, arid conditions are in the east.