The abbreviation for the state Vermont is VT. 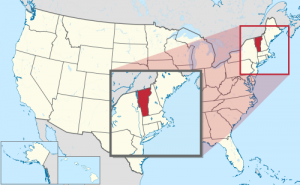 Vermont is one of the New England states, located in the northeastern region of the country. Bordered by Massachusetts, New Hampshire, New York and Canada (to the north), Vermont is one of the smallest states both in population and size. Both the state capital of Montpelier and the largest city, Burlington, are among the least populous cities in the country. With a Native American history, Mohawk and Abenaki people have inhabited the area for thousands of years. The state played a crucial role in both the Revolutionary and Civil War, having announced sovereignty from the British Crown in 1777 and abolishing slavery long before fellow states. As a northern state, the region is rich in mountainous and timberland geography.