The abbreviation for the state Wisconsin is WI. 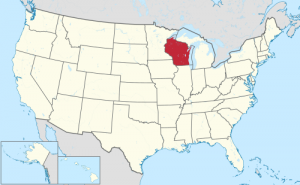 Wisconsin is a northern U.S. state that is bordered by Minnesota, Iowa, Illinois, Michigan and two of the five Great Lakes of North America, Lake Michigan and Lake Superior. The state capital of Madison is a lakeside city which is regarded as a key “swing” state in elections. The state’s largest city is Milwaukee, founded by a number of fur traders and heavily populated by German — among other European — immigrants through the 1840s. The effects of this immigration led to a contemporary renown for both dairy and cheese industries, as well as persistent regional festivals like Oktoberfest, among a number of festivals celebrating Italian, Irish and Polish heritage. The state is highly diverse in both geography and economy, with great variation between lowland lakes and highland mountains.