The abbreviation for the state West Virginia is WV. 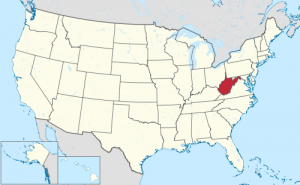 West Virginia, known as the Mountain State, is set within the Appalachian Mountains of north east America. Much of the rugged terrain is covered by the spruce trees of the dense Monongahela National Forest where Spruce Knob is the highest point. The summers can become tropically warm contrasted by winters with significant snowfall. There are many rivers including the Ohio River, the Buckhannon River and Buffalo Creek providing transportation and recreational sports. Situated on the Kanawha River is the elegant capital, Charleston which was founded in 1773. Fairmont, Wheeling and Morgantown are well-known cities while smaller towns include Grafton and Mount Pleasant. The state’s prosperity was founded upon the extensive salt mining, coal mining and timber industries.