The abbreviation for the state Texas is TX. 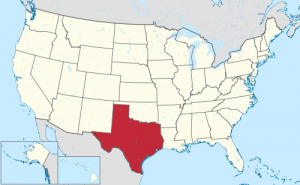 Popularly known as the Lone Star State, Texas is the second largest state in the United States. It has a sizeable Hispanic minority, and that is why Spanish is one of their most widely-spoken languages. Since the 16th century, the state has had the flags of 6 different countries fly over it- Spain, Mexico, France, Confederate States, the USA, and the Republic of Texas. The state is traditionally associated with cowboys, and that is because their cattle industry was a top driver of the economy. The economy of the state experienced a serious boom after the discovery of petroleum deposits in the 20th century. Profits from petroleum were heavily reinvested in local industries, and now, the state ranks second in the number of Fortune 500 companies. They have 54 companies on the list.