The abbreviation for the state South Dakota is SD. 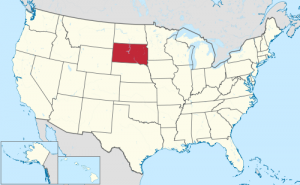 South Dakota, which became a state in 1889, is named after the Lakota and Dakota Sioux tribes who historically lived in the area, and many of whom still live there today. Its population is small and its economy is mainly based on farming and ranching. South Dakota is the home of one of America’s most famous monuments, the Mount Rushmore National Memorial – which the Lakota Sioux knew as The Six Grandfathers before it was carved. More than two million people come to visit it each year, as well as South Dakota’s other tourist attractions, such as the historic town of Deadwood and the Crazy Horse Memorial.