The abbreviation for the state Oregon is OR. 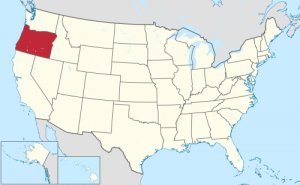 Oregon is a northwestern U.S. state which sits on the Pacific shoreline and West Coast region. Separated from Washington state by the Columbia River, other border states include Idaho, California and Nevada. With a large landmass, Oregon is a diverse geographically, with a varied plethora of mountains, volcanoes, lakes, rivers, forests, deserts and shrub-lands. Oregon’s capital is Salem (not to be mistaken for Salam, Massachusetts), but the largest city is Portland, a city renowned for its environmentally conscious population, countercultural scene and farm-to-table ethos. Native Americans had long inhabited Oregon well until the 18th century until the arrival of European — first Spanish, then British — explorers. The region held some notoriety in the 19th century as one of the most dangerous area of the United States due to widespread racketeering.