The abbreviation for the state Oklahoma is OK. 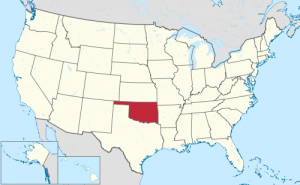 Situated in the South Central region of the USA, Oklahoma is the 28th most populous state. Oklahoma City is the state capital with a population of more than 1.3 million people. Oklahoma has a subtropical, humid climate with terrains ranging from mountains to rainforests. The largest American Indian population in America lives in Oklahoma. Oklahoma is situated in what is known as tornado alley. This is an area of the United States where most tornados occur. Route 66, the most famous highway in America, passes directly through the state of Oklahoma.