The abbreviation for the state North Dakota is ND. 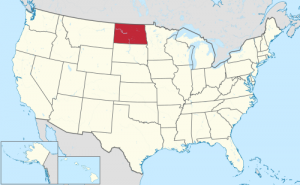 The centralised state of North Dakota shares a border with Canada and was named after the native Sioux tribe. Often referred to as the Peace Garden State, the landscape features the stunning red clay mountains of the Badlands, the Theodore Roosevelt National Park and the prairies of the Red River Valley. Rivers include the Cannonball, Des Lacs and the Goose. The main industry is agriculture with wheat, oats, barley and sunflower seeds being just a few of the principal crops. The state’s climate is noted for its harsh winters. Although Bismarck, which was founded in 1872, is the state’s capital, the largest city is Fargo which is heavily industrialised. Other major cities include Jamestown and Grand Forks.