The abbreviation for the state New Mexico is NM. 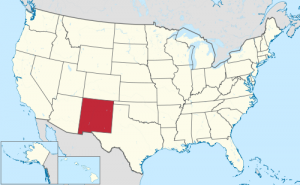 New Mexico is a southwestern U.S. state, bordering Mexico, Oklahoma Texas, Arizona, Colorado and Arizona. With an economy largely reliant on oil and mineral extraction, the region is also renowned as a tax haven (and thus a filming location) owing to its low personal income tax. Despite its name, New Mexico was named long before Mexico won independence as a nation from Spain, having been described as thus by Spanish explorers in 1563 after which it was colonised in 1598. The capital of New Mexico is Santa Fe, a city renowned for its adobe and Spanish colonial architecture, as well as its prevalent creative arts scene. The largest city is Albuquerque, although Roswell remains one of the better known cities in popular culture due to its role in alien conspiracy theories revolving around a UFO crash incident.