The abbreviation for the state New Hampshire is NH. 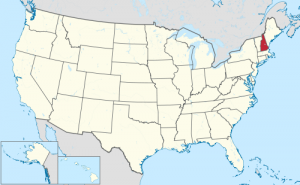 New Hampshire is located in New England, where it is bordered by fellow states Vermont, Maine and Massachusetts, as well as Canada’s Quebec to the north. As with many other of the New England states, it has sat at the forefront of America’s history under the British Crown, being the first of such colonies to secede. New Hampshire is divided from Maine by the Piscataqua River, a major focus of the region’s economy through shipping and the fishing of oysters, lobsters and mussels, among other marine species. With mountain ranges to the north and coastal regions to the south, New Hampshire has a varied geology which attracts both skiing, fishing and coastal tourism. The region is renowned for it impressive autumnal scenes.