The abbreviation for the state Nevada is NV. 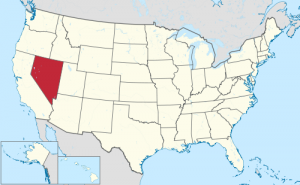 Nevada, known colloquially as the “Silver State” due to the importance of silver in the state’s founding economy, is a landlocked western U.S. state which is bordered by California, Arizona and Utah. The geography of Nevada mostly consists of dry desert (including the Mojave Desert), with natural lakes and mountains acting as sky islands (isolated mountains). Carson City is the state’s capital, but Las Vegas is both the largest city in the state and the centre of gambling in the United States as a whole, owing to its prevalent casino, entertainment and hospitality industries. Only a small percentage of the populace remains in rural settlements due to its parched land. Nevada is renowned for its military test bases, some of which formed the basis of nuclear testing in the Cold War era.