The abbreviation for the state Montana is MT. 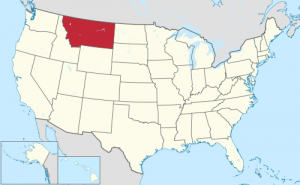 Montana is a state located in northwestern United States which, despite being the fourth largest state, is the third least densely populated. Consisting of a varied topography of mountain ranges (as part of the famed Rocky Mountains), prairie lands and dry badlands. Bordered by Idaho, Wyoming, North and South Dakota, as well as Canada to the north, the region is famous for its agricultural economy which revolves around a ranching culture. Montana’s capital city is Helena, a former gold rush town, while its largest city, Billings, is the seat of the famed Yellowstone Country. The history of Montana, much like the other Northwestern territories, is one of long Native American settlement and conflict over land ownership and control with European settlers.