The abbreviation for the state Mississippi is MS. 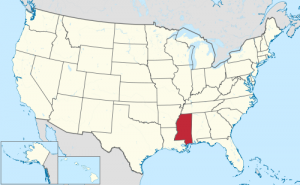 Mississippi (MS) is the 32nd largest state in the United States and its capital is the city of Jackson. Its name originates from the Native American term for Great Waters or the Father of Waters. It’s famous of its agricultural potential, because of the rich fertile lands and its increased network of rivers.

The Mississippi River, also known as the Old man River, is the largest in the United States and it’s the main waterway for the entire nation. Jackson is one of 4 worldwide cities which hosts the International Ballet Competition. Also, the first heart and lung transplants in the world were performed in Mississippi. The state includes many towns which have been granted honorary titles such as the Greenwood which is known as the Cotton Capital, Belzoni which is named the Catfish Capital, and Vardaman which is considered the Sweet Potato Capital.