The abbreviation for the state Minnesota is MN. 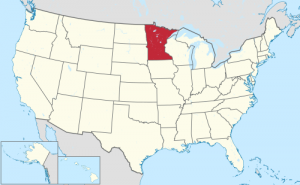 Minnesota is a northern state which is bordered by Iowa, North Dakota and South Dakota, with Canada (Ontario and Manitoba) stretching across its northern boundary. First colonised by French explorers after centuries of indigenous Sioux and Sioux-related inhabitance, Minnesota experienced waves of European migration throughout the 19th century, creating an interesting admixture of Scandinavian and German influences. The state is home to many lakes and forest land, with wolves, black bears, moose, elk, bison and caribou found throughout its protected parks. The capital of Minnesota is Saint Paul and the largest city is Minneapolis, a city renowned for both its LGBT scene and as the birthplace of the “Minneapolis Sound”, a genre of music penned by the musician Prince.