The abbreviation for the state Michigan is MI. 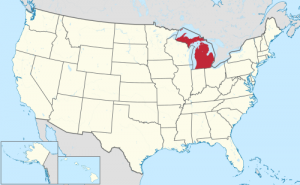 Michigan is a northeastern state, located in the Great Lakes region of the United States as it is bounded by four of the eponymous Great Lakes. Because of the state’s proximity to fresh lakes, a citizen is never less than six miles from a natural water source at any point in the state. Michigan’s capital is Lansing, the only state capital that is not a county seat. The largest city in Michigan is Detroit, a metropolitan area which is the centre of the U.S’ major automotive industry, although this industry took a significant hit at the end of the 20th century. Michigan played a fundamental role in U.S. political history as the first meeting point of the Republican Party in 1854.