The abbreviation for the state Maryland is MD. 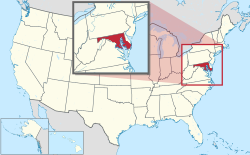 Founded as a colony of Great Britain in 1632, this mid-Atlantic state was named after the queen of England at the time. Maryland is sometimes known as the Old Line State, commemorating an important battle in the Revolutionary War. Other people call it America in Miniature, because it contains so many different geographical features – from beaches to forests to mountains. Maryland is famous for its seafood, especially crab, and it’s also known for having the first railroad station ever built in the United States, Mount Clare Station in Baltimore. Baltimore is the largest city in Maryland, but Annapolis, founded in 1649, is its capital.