The abbreviation for the state Maine is ME. 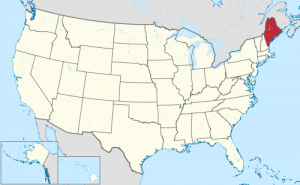 Maine is a New England state, located in northeastern United States and bordered by Canada, New Hampshire and the Atlantic Ocean. With a famed coastline consisting of rocky and jagged vistas, the regions is renowned for its seafood, particularly clams and lobster. Maine’s history is one of early Native American settlement, predominantly by Wabanski people. The first Europeans to make contact in the region were actually Norse Vikings led by Leif Erikson, who attempted to settle Canada’s Newfoundland. The first Europeans to settle proper arrived in 1604 after which chunks of the area became French colonies. The capital of Maine is Augusta whilst the largest city is Portland, a coastal city and metropolitan area that is the namesake of the West Coast city of Portland, Oregon.