The abbreviation for the state Louisiana is LA 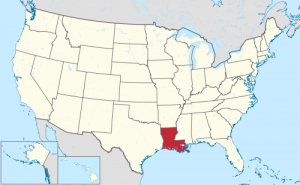 Louisiana is a state in the Deep South region of the United States. It was named after Louis the 14th, who was King of France during the 1600’s. Out of the 50 states, it’s the 25th most populous, as well as being the 31st largest. Baton Rouge is the capital of Louisiana and situated on the Mississippi River. Much of Louisiana was formed from sediment from the river resulting in large areas of swampland. There are more Native American tribes in Louisiana than in any other state. Known for its humid subtropical climate, it has short warm winters and long, hot rainy summers. Louisiana is known for agricultural, natural gas and oil industries.