The abbreviation for the state Iowa is IA. 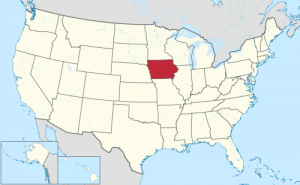 Iowa is a landlocked U.S. state located in the Midwestern region, a region occupying the northern central region of the country. Formerly assimilated into French Louisiana (a large area which stretched the Mississippi river basin), the state is bordered by Wisconsin, Illinois, Missouri, Minnesota, Nebraska and South Dakota. The region is often referred to as the “Corn Belt”, owing to its economic reliance on agriculture, notably mixed crops (including corn). Some 60% of Iowa’s rolling hills and prairie land is covered in crops, and the state proved important throughout the World Wars as an important centre of agricultural production. The state’s capital Des Moines is adapted from its French colonial name, Rivière des Moines, and is renowned as a centre for insurance businesses.