The abbrivation for the state Idaho is ID. 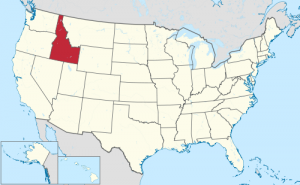 Situated in the north west of America is the Gem State of Idaho which shares part of its border with Canada. The stunning, mountainous landscape includes the Sawtooth and Bitterroot Ranges which are part of the Rocky Mountains. The Yellowstone National Park falls within Idaho’s boundary and there are wildlife conservation parks at Kootenai and Bear Lake. The Snake River Plain is a rich, agricultural region which produces main crops of wheat and potatoes. Hydro-electric power has become an important part of the state’s economy along with traditional industries such as timber and silver mining. Amongst the many rivers are the Portneuf, Moyie and Clearwater. Major cities include Pocatello, Twin Falls, Nampa and the state’s capital of Boise.