The abbreviation for the state Hawaii is HI. 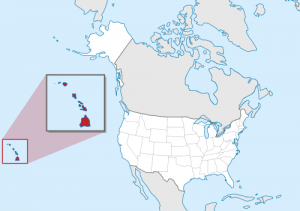 Known for its beautiful scenery, exquisite beaches, and tropical weather Hawaii is made up of islands and is located in Oceania. It became the 50th state of the United States on August 21, 1959. Hawaii has many active volcanoes; nonetheless, it still remains a popular tourist attraction. Sometimes referred to as the “Aloha State” the island is rich with East Asian and North American traditions, along with the indigenous culture. The capital city is Honolulu, which is located on the island of O’ahu. Hawaii is home to millions of people and the national language spoken is English and Hawaiian. Hawaii’s economy relies profoundly on its tourism and agriculture to generate money and exports clothing along with sugarcane, pineapples, coffee, and macadamia nuts.