The abbreviation for the state Georgia is GA. 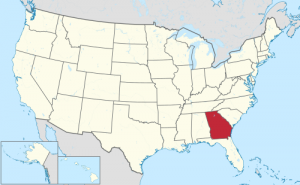 Georgia, GA, is on the east coast of the US bordering the states of Florida, Alabama, South Carolina and North Carolina. Originally one of the first 13 states of America, it has a population of over 10 million and is in the Eastern Standard Time zone, GMT -5hours. Georgia has been named the Peach State after of the high-quality fruit grown there. Atlanta is the state capital and home to global giant Coca Cola and CNN Studios. The oldest city in Georgia is picturesque Savannah, once the British colonial capital. It is a seaport and historical town that attracts many visitors each year. Other places of note in Georgia include Macon, Athens, the Appalachian Scenic Trail and the Blue Ridge mountain range.