The abbreviation for the state Deleware is DE. 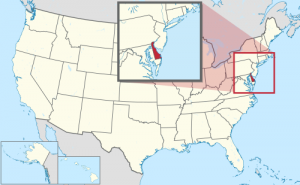 Delaware is a small U.S. state located on the Atlantic coast and bordered by Maryland, Pennsylvania and New Jersey. Named after Virginia’s first colonial governor, an English captain titled the 3rd Baron De La Warr, Delaware’s capital is also Dover, itself named after the famous port of Dover in Kent, England. The largest city is Wilmington, again named after the Earl of Wilmington in England. As can be gathered from Delaware’s namesake, the region played a crucial role in British colonisation throughout the 17th century, although the area has also seen Swedish, Dutch and French influence. Due to Delaware’s position as the second smallest U.S. state, the geography is fairly uniform, with flat and marshy land, coastal plains and few hills.