The abbreviation for the state Arkansas is AR. 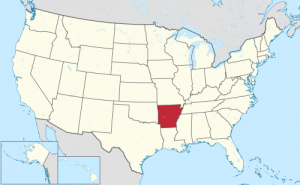 Arkansas is a southern U.S. state derived from the French pronunciation of a Native American (Quapaw) word, akakaze, which means “land of the downriver people”, so named by the people who inhabited the region. Bordered by Louisiana, Texas, Oklahoma, Missouri, Tennessee and Mississippi, the region was admitted into the United States in 1836 only to withdraw and join the Confederates during the Civil War in 1861. Remnants of its history remain in the cultural sites of the state, including the Old State House — one of the oldest surviving southern capitol buildings in the U.S.— located in Little Rock, the capital of Arkansas. The geography of Arkansas is roughly split into two halves; highlands in the north and lowlands in the south.