The abbreviation for the state Arizona is AZ. 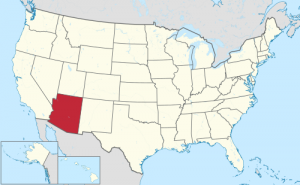 Arizona is state found in southwestern United States, bordered by New Mexico, Utah, Nevada, California and Mexico. As the sixth largest state in the country, the area is fairly populous accounting for roughly 7 million people. The state is known for its desert geography and hot climate, although Douglas fir and spruce forests are found throughout the state. The UNESCO World Heritage Site, the Grand Canyon, is found in Arizona, as are the famous Sedona sandstone formations and Oak Creek Canyon. Arizona has a rich Native American history, although conflicts and disasters, such as the Mexican-American War, the Civil War and the Great Depression, have altered the state’s demographics over time.