The abbreviation for the state Alabama is AL. 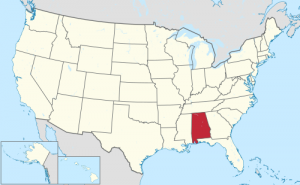 Alabama state is found in southeastern United States, bordered by Tennessee, Georgia, Florida and Mississippi. Nicknamed the Yellowhammer State after the indigenous bird of the region, Alabama’s capital city is Montgomery with Birmingham being its largest city. The state has a scattered history of insurgency and slavery, with its Native American population removed entirely through 1830. The state joined the Confederate States in the American Civil War in which some 120,000 Alabama soldiers fought. As the thirtieth-largest state, the geography of Alabama can vary, although it is renowned for rolling grassy plains with mountain ranges like the Appalachian Mountains to the far north.